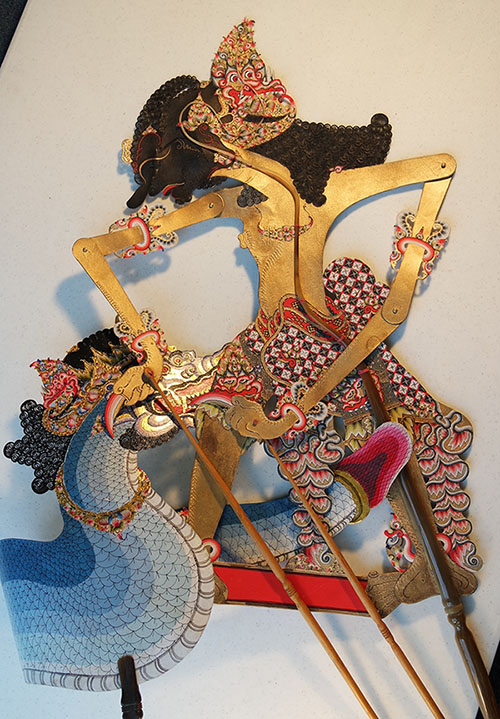 PART I
A spiritual teacher, Durna, asks his loyal student Bima (the second of the five Pandhawa brothers) to search for the science of the “Whence and Whither of Being” (kawruh sangkan paraning dumadi), in order to achieve divine enlightenment. To commence his quest, he must go to dangerous places. First, he must search for “Tall Tree, Nest of the Wind” on the peak of Mt. Candramuka. There Bima encounters two ferocious ogres who attempt to foil his effort—the ogres are actually transformed gods testing Bima’s will and strength by attacking him. Bima repels and kills the giants, but he does not find the tall tree, nest of the wind. He returns to Durna empty-handed.
PART II
Bima’s brothers, the Pandhawas, are worried about his quest for enlightenment, especially because his teacher, Durna, resides with the Kurawas (the Pandhawas’ rivals). Arjuna is contemplating his brother Bima’s situation, and asks for advice from his beloved jester Semar and Semar’s sons. In his journey to find his brother, Arjuna is attacked by a group of giants. The giants are repelled and killed.

PART III
As the second leg of Bima’s quest, his guru orders him to search for purifying water in the depths of the ocean. Plunging himself in the ocean, he is attacked by a large serpent. Bima destroys the dragon, using his long and sharp thumbnail. Miraculously, a tiny figure, the divine teacher Dewa Ruci, appears from nowhere and teaches Bima the highest mystical insight by instructing him to enter the cavity of his body through his right ear. There, guided by his divine teacher, Bima discovers the spiritual self through the world that is filled with light of various colors. After receiving and understanding the mystical insight, grasping the knowledge of the union of servant and Lord (manunggaling kawula kalawan Gusti), Bima withdraws from Dewa Ruci’s body, asking his blessing to disseminate the knowledge that he has received from his holy teacher.

WAYANG & GAMELAN
The Javanese wayang kulit or wayang purwå (shadow-play with flat leather puppets) is one of the great dramatic forms of the East. Above and beyond its value as a wonderful entertainment, it is important to the Javanese as a ceremony. It provides a means of contact with the ancestral spirits and establishes an atmosphere of serenity and balance; it is also a means of educating the young in the wisdom of the culture; and it employs, as a frame of reference, philosophical and mystical ideas.

In general, a play falls into three main divisions defined by the planting of the kayon or gunungan (tree or mountain) in the center of the stage, thus marking the line between the forces to the dhalang’s right, usually positive, and the forces of left, usually negative. The dhalang is in complete charge of the performance. During the performance he manipulates the puppets, delivers all the dialogue in many voices, describes the scene, comments on the meaning—often drawing on events of the day—and signals the orchestra what and when to play.

A gamelan (orchestra), using various combination of instruments, is traditionally and essentially accompaniment to puppet shows, dances, feasts, and ceremonies in Java.  Most of the instruments are bronze: tuned gongs, suspended vertically or horizontally; and instruments with tuned keys, suspended over tubular resonators or a resonant cavity in the base of the instrument. Other instruments include a two-stringed fiddle, xylophones, and drums. A full Javanese gamelan comprises two sets of instruments, one in each of two tuning systems: sléndro, with five tones per octave, and pélog, with seven. In this performance, a chamber ensemble of only sléndro set will be used.