With funds provided by the Yale Council on Southeast Asia Studies, and through the efforts of the Yale Department of Music and Yale Gamelan founding director, Sarah Weiss, this ensemble was purchased from Ki Midiyanto - an 11th-generation Central Javanese dhalang, renowned gamelan musician, and long time teacher at UC-Berkeley. 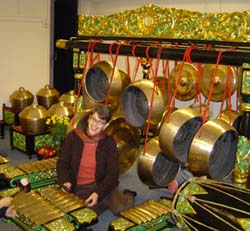 They were shipped from Wonogiri, Indonesia where they had been used regularly for wayang and klenengan performances over the course of about four years. Shipped by sea, the instruments arrived on campus in November 2006 and were unpacked by volunteers in December. The ensemble was named Gamelan Suprabanggo, a singkatan formed from the names of the sons of Ki Midiyanto (Supraba and Anggo).

In spring semester 2007, Dr. Weiss began teaching Yale’s first seminar on the history, theory, aesthetics, cultural contexts and performance of Javanese karawitan. The students in the seminar formed the core of the Javanese performance ensemble, playing formal and informal concerts and klenengan from 2007 - 2012 (see Gallery).

In 2013, Dr. Weiss left Yale campus for Yale-NUS College in Singapore, and the Gamelan Suprabanggo remained on hiatus through 2013-14. The Yale Gamelan has been maintained as a teaching ensemble since the Fall of 2014.

Gamelan Suprabanggo is a complete gamelan which means that it has instruments tuned in both the 5-tone Slendro and the
7-tone Pelog scales or laras.  (See About Gamelan Music)