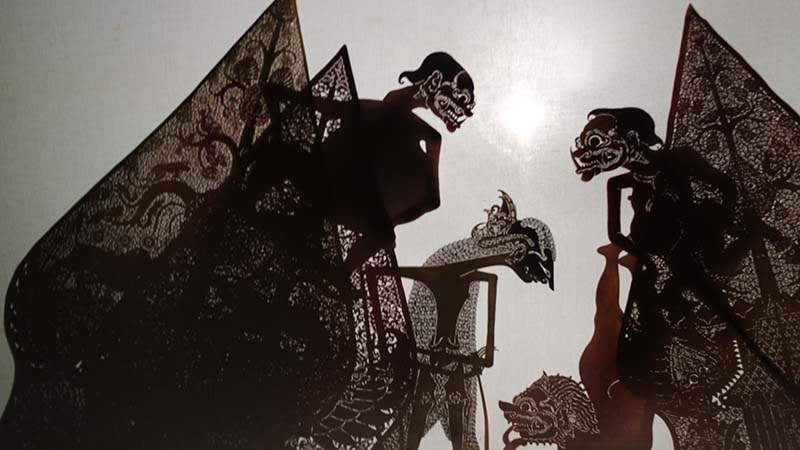 SYNOPSIS OF THE STORY
Niwåtåkawåcå is a very powerful demon king, since the highest deity has given a sacred knowledge of invulnerability, except for one secret spot.  The demon king wants to marry the celestial nymph Supråbå, but the gods refuse to give the beautiful nymph to him.  Consequently, the titan king threatens to destroy the abode of the gods.  In the meantime, the gods also learn that Arjunå, the middle of the five-Pandhåwå brothers is deep in meditation in a grotto of mountain Indråkilå, accumulating the great power to destroy evil of the world. Steadfastly meditating, the knight Arjunå cannot be awaken by all kinds of temptation, including the presence of nine beautiful celestial nymphs send by gods to tempt him, and an attack by a giant minister who, effected by the power of Arjunå, transform himself to a wild boar.  Finally, the gods reward Arjunå with a powerful arrow called Pasopati.  With the help of Supråbå, who is able to persuade the demon king to reveal his secret spot of vulnerability, Arjunå kills the demon king with the arrow Pasopati.

WAYANG
The Javanese wayang kulit or wayang purwå (shadow-play with flat leather puppets) is one of the great dramatic forms of the East.  Above and beyond its value as a wonderful entertainment, it is important to the Javanese as a ceremony.  It provides a means of contact with the ancestral spirits and establishes an atmosphere of serenity and balance; it also a means of educating the young in the wisdom of the culture; and it employs, as a frame of reference, philosophical and mystical ideas.

In general, a play falls into three main divisions defined by the planting of the kayon or gunungan (tree or mountain) in the center of the stage, thus marking the line between the forces to the dhalang’s right, usually positive, and the forces of left, usually negative.  The dhalang is in a complete charge of the performance.  During the performance he manipulates the puppets, delivers all the dialogue in many voices, describes the scene, comments on the meaning—often drawing on events of the day—and signals the orchestra what and when to play.