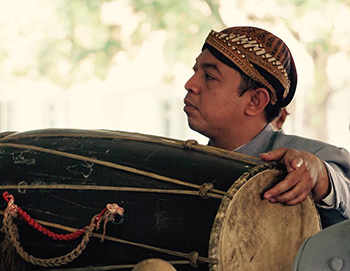 Darsono comes from a prominent family of music and theatre traditions in Central Java, Indonesia. He grew up in a small village outside of the court city of Surakarta, long known as one of the major hubs for performing arts in Indonesia. Darsono studied karawitan, a genre of music played with a gamelan (a primarily bronze percussion ensemble) from Central Java. He also learned the revered art of shadow puppetry primarily from his father and other relatives, until he continued his study of Indonesian performing arts at Institute Seni Indonesia, a national conservatory of the arts in Indonesia. Darsono graduated in 2002 with a Bachelor of Performing Arts, and a major in traditional Javanese court music. Today, he is one of the most prominent musicians inside and outside of the city of Surakarta. At the royal court of Mangkunegaran, Surakarta, he serves as the main drummer for dances performed at the court. In the surrounding villages, he is regularly featured as an accompanying musician at shadow puppet theatre performances (wayang kulit). At his alma mater, he teaches and inspires many young generations of musicians who are mesmerized by his improvisational practices on several instruments of the gamelan.

Darsono’s first opportunity to perform abroad was when he joined the original troop for Robert Wilson’s I La Galigo, a musical theatre production based on a myth from Sulawesi, Indonesia, which premiered in Singapore in 2004. Ever since, he has traveled widely as a teacher and performer of music as well as a puppet master (dhalang) in Europe, the US, and Asia. In the U.S., Darsono has been appointed as an artist-in-residence at several institutions, including Wesleyan University, Smith College, Tufts University and Bates College. More recently, he served as a Visiting Scholar at Cornell University.  During his residencies in the U.S, he has traveled and performed music with a number of university and community groups. Darsono is proud to watch the traditional arts of his culture–the trade of his family for generations–become a bridge that allows him to travel far, experience various cultures and interact with people from all over the world. Darsono believes that within the domain of the performing arts, there is a “mysterious property” that allows people from various backgrounds to naturally come together, transcend differences, and reach a deeper mutual understanding.